For the purposes of  the Convention, the term “torture” means any act by which severe pain or suffering, whether physical or mental, is intentionally inflicted on a person for such purposes as obtaining from him or a third person information or a confession, punishing him for an act he or a third person has committed or is suspected of having committed, or intimidating or coercing him or a third person, or for any reason based on discrimination of any kind, when such pain or suffering is inflicted by or at the instigation of or with the consent or acquiescence of a public official or other person acting in an official capacity. It does not include pain or suffering arising only from, inherent in or incidental to lawful sanctions. 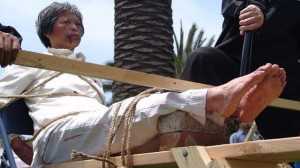 Amnesty International documented cases of torture and other cruel, inhuman or degrading treatment in 81 countries in 2007. Some studies indicate that between 5 and 35% of the world’s refugees have been estimated to have experienced torture. In 2007, there were 15.9 million refugees around the world and an estimated 26 million people displaced internally by conflict. This suggests that the number of torture survivors in the world today may range from 2 to 15 million. These estimates do not include those affected by war or other human rights violations.

A lot of school lessons such as history , sociology e.t.c can make the students more sensitive about human rights . This can happen through dialogue and the energetic participation during the lessons . Unfortunately the school books aren’t the ideal in order to transport ideas about human rights to the students , and that is the reason the study of other sources is necessary  .