Everybody knows the guy who jumps around and gets coins from brick blocks, Nintendo’s Super Mario! This year Super Mario marks 35 years of amazing games, alongside with hundreds of memories, and of course Nintendo had to celebrate it with an interesting list of events and titles for the Nintenders who own a Nintendo Switch.

Firstly, a vast amount of new game titles has been announced, some already released and some available to preorder at the Nintendo Eshop. Let’s start with the list:

Moreover, new events and features will be added in various games. More specifically:

Furthermore, games and merchandise are here to fascinate us. With more details:

Last but not least, a pretty cool contest is running but, unfortunately, is only available for player living at US-Canada region.

These are the events and elements are featured due to the Super Mario 35th Anniversary and I am excited for each and every one of them! 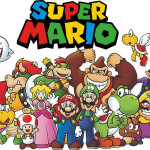