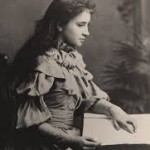 Helen Keller was born on June 27th, 1880 in Taskoumpia of Alabama. At the age of 19 months, she developed an unknown disease described by doctors as “acute congestion of the stomach and brain” which may have been commonly called smallpox or menigitis. The disease left her deaf and blind. She lived, as she recalled in her autobiography, “at see in a dense fog”.

Helen’s parents took her to famous doctors and teachers in order to help her. One of them, Michael Anagnos, asked a 20-year-old graduate of the school for the blind, Anna Sullivan, who also had some vision problems, to become Helen’s teacher. Sullivan immediately began teaching her to communicate by writing words in her hand. She was frustrated, at first, because she did not understand that each object had a word that identified with it in a unique way. Keller realized the meaning of the words a month later when she was surprised to learn that the movements her teacher made in her palm of her hand while running cool water over her other hand symbolized the idea of water. 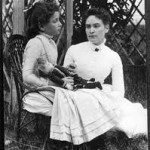 In May 1888 Keller began attending the Perkins Institute for the Blind. In 1894, Keller and Sullivan move to New York to attend the Wright Humason School for the Deaf. In 1896, she entered the Cambridge School for Young Ladies before being accepted,  in 1900, to Radcliffe College of Harvard University. In 1904, at the age of 24, Keller graduated as a member of Phi Beta Kappa and became the first blind person to earn Bachelor of Arts degree. Keller wrote a total of twelve published books and various articles. At the age of 22, she published her autobiography “The story of my life” (1903), with the help of Sullivan. Keller wrote “The World I live in” in 1908, giving readers a glimpse of how she felt about the world. 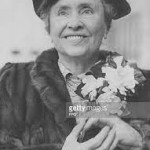 Keller spent much of her later life raising money for the American Foundation for the Blind. She died in her sleep on June 1st, 1968 at her home.

Agatha Christie, with full name Dame Agatha Mary Clarissa Christie, also known as Mary Westmacott, was an English crime novelist. She also wrote short stories and plays , but she is best known for her detective novels which she wrote under her own name. The most popular characters that she created are Hercule Poirot, Miss Jane Marple, Tommy and Tuppence. She also wrote the world’s longest play, The Mousetrap.

Christie was born on 15 September 1890 into a wealthy upper middle-class family in South West England and she had a very happy childhood. She took home tutoring by her parents and among others she learnt to read and write, basic arithmetic and music (the piano and the mandolin).

Christie for a long time had been a big fan of crime-detective novels. Some of her favourites were: The Woman in White and Sherlock Holmes stories.

In 1919 she wrote her first detective novel ‘‘The Mysterious Affair at Styles’’ with main character Hercule Poirot a Belgian police officer who became the main character in 33 Christie’s novels.

She died on 12 January 1976 and it was a huge damage to the literary community. 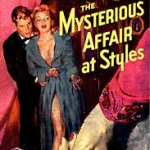 (By Dimitra Diamantopoulou, A Class)

Frida Kahlo was a painter, born in one of the suburbs of Mexico city in 1907. However she considered her life birth in 1910, as she wanted to be born the same year as the Mexican rebellion.  When Frida was a little girl, the family was extremely poor and it was too hard for them to get by. As a result, Frida had to work in several shops to support the family’s income.

When she was six, she went through a severe illness, and her leg was permanently damaged. Her classmates used to call her “lame Frida” and she was left with indelible traumas about it. So when she was older, she tried to provoke the others, through her weird and distinct style in clothes. After a serious car accident later, she started painting, although until then she had almost no education in this at all. This accident caused her to become isolated and left her with problems about her health for the rest of her life.

Her art can probably be described as surrealism, folk art or naïve art. Mexican rebellion obviously influenced her works. She started painting self-portraits when she was recovering from the accident. She also said   «I paint myself because I am so often alone and because I am the subject I know best.»  Her works, influenced by her internal and external traumas, her several miscarriages she had in her wedding, are filled with the emotion of pain. In her life she painted more than 140 works, 55 of them where self portraits.

She developed her own personal style of painting, by combining symbolism, Mexican Christian and Jewish tradition, but by giving to the symbols a distinct meaning. The colors used are bright. She was also greatly influenced by the artists Diego Rivera and André Breton. She fell in love with the first one and they got married.

Frida died in1954, due to a bad health condition, leaving behind her a lot of culture and beauty. Her knee suffered from gangrene and she suffered from bronchopneumonia. The cause of death was acclaimed to be pulmonary embolism, although this may had been done on purpose.