By George Patronis (A Class) 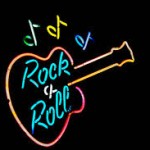 Rock and roll is a type of music. It was first introduced and evolved in the late 40s and 50s. People who listened to it usually wrote it “Rock & Roll” or “Rock ‘en’ Roll”.

It combined various musical styles suck as jazz, blues and usually rock with country music. Despite the fact it was produced from the 30s, it acquired its name in the 50s. It was evolved mainly at the United States. As the years passed, rock and roll was more often referred to rock songs that combined rock and country or to rock songs only. In the early 40s, its primary music instruments were the piano and the saxophone while after the 50s they were replaced by the electric guitar. The beat was that of a blues song and there was always a backbeat by drums that made the song more vivid. 1 or 2 guitars and the drums were essential for someone to produce “Classic Rock & Roll”. However, Rock and Roll wasn’t just a music genre. It had a big influence on people’s lifestyles, attitude and fashion. It was the origin of the 60s-90s music genre “Rock.”

The most popular Rock and Roll artist was Elvis Presley. He was among the most significant cultural icons of the 20th century and was often called “King of Rock & Roll”. He made a huge success due to his popular songs and live performances. In 1965 his albums “Elvis Presley” and “Elvis” took the first place at charts followed by his next two albums “Loving You” and “Elvis’ Christmas Album” which maintained their place at the top of the charts.

The WHO was a Rock and Roll band. It was formed by Roger Daltrey (singer), Pete Townshend (guitarist), John Entwistle  (bass guitarist) and Keith Moon (drummer). Their best album “Who’s Next” made it at the first place at British Charts, 2nd  place at French and Netherlands charts and 4th place at U.S.A. charts. They were very popular among British and American bands and influenced a lot people of 60s.  Its top track Baba O’ Riley made a huge success.

Led Zeppelin was a British band and among the most popular of Rock and Roll history. They were formed by Robert Plant (vocals), Jimmy Page (guitar), John Bonham (drums) and John Paul Jones (bass guitar, keyboard). Their most popular albums Led Zeppelin IV and Led Zeppelin II had some iconic riffs and contained Rock and Roll, Country and Rock influences. “Led Zeppelin IV” at 1971 (24th on the list of albums ever, made published by Mojo) managed to get 1st place at British and Canadian charts and second place at USA, Australia, Italy, France, Japan and Sweden. It contained some of the bands’ most popular songs such as “Black Dog”, “Rock & Roll” and Stairway to Heaven. “Led Zeppelin II” in 1969 (3rd most influencing album ever by ‘Guitarist’, 6th best album of century by ‘The guitar’) was at top place of charts. More specifically, it managed to get 1st place on British, USA, German, Australian, Canadian and Spanish charts. It contained popular songs such us “Whole Lotta Love”, “On Ramble” and more. Led Zeppelin was one of the most remarkable bands ever and was considered the 2nd best rock band ever.

The “Rolling Stones” are an English band formed in 1962. It  consisted by Mick Jagger (vocals), Mick Taylor (guitar), Ian Stewart (piano), Keith Richards (guitar), Bill Wyman (bass) and Charlie Watts (drums). They made big success at the start and they first set foot on stage with a nickname “The Worlds’ Greatest Rock ‘n’ Roll Band”. They had many successful albums and they made the highlights with “Some Girls” (1978) and “Tattoo You” (1981) being their 2 most sold album. “Some Girls” contains many popular songs such as “Miss You” and “Just my Imagination”. It conquered the 1st place at Canadian and USA charts and amazingly held the title for almost a year.

In addition, “Tattoo You” made also a big success introducing songs like “Start me Up” and “Neighbors” and got the first place on Australian, Canadian, Dutch, French, New Zealand and USA charts .The “Rolling Stones” influenced the people then and they are still popular today. Their icon is unique and well-known all over the world.

← The History of Castles
OVERPOPULATION →