By Gregory Kouverianos (B Class) 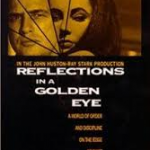 The plot takes place at the American south in the fourth decade of the last century and describes the lives of two neighboring, military officers’ families. Actually, the film focuses on the deeper thoughts and the repressed desires of the heroes. Based on a 1941s best seller, it is directed by the cinema “veteran” John Huston and the main characters are impersonated by the well known, worldwide classed film stars Marlon Brando and Elizabeth Taylor. Huston manages to flesh out the psychology of his characters slowly and at the same time to make a pleasurable environment for the audience. However, where the film really shines, is the fact that it has exceptional allegories about sexual perversions like fetishism, sadomasochism, homosexuality, voyeurism and nymphomania as well as riveting social, psychological and historical references.  I was pleasantly surprised by the film’s similarities to the Freud’s psychological inventions and that’s why I’d wholeheartedly recommend it to anyone who has an open mind, as a deep and thoughtful piece of art. However, unfortunately, the film is unlikely to reach a wide audience, despite the important messages, the absorbing plot and the professional performances.