By Frosso Athanasopoulou (B Class) 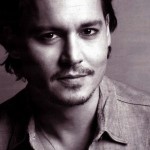 Among all the accomplished actors of our century, Johny Depp could be regarded as the most eccentric of all. Born on June 9, 1963 he is not only an actor, but also a producer and an excellent musician. Despite the difficulties he faced in his past, including the divorce of his parents and the fact that they had moved more than 20 times, he was creative from a very young age. When he was 12, he received a guitar as a present from his mother, and left school to pursuit the life of a rock star.

His career in acting started with the famous series “21 Jump Street” and quickly became a much loved teen idol. In 1984 he begins acting in movies, and with Tim Burton’s film Edward Scissorhands, a success that established Depp as leading Hollywood actor and began his long cooperation with Burton, in business and in friendship.

The most popular of all the films, from the 80’s until today. “Chocolat”, “Pirates of the Caribbean”, ”Charlie and the chocolate factory”, “Sweeney Todd” ,”Alice in Wonderland”, ”The Lone Ranger” are some of a great list of films which have his distinguish sign.

From my point of you, Johny Depp is not just an actor. He is a person that gives the character he resembles his special style, through the voice, the gestures, even the way he walks. Furthermore, it is more than remarkable the way he completely changes and is no longer Johny Depp each time he wears a red hat, or his pirate boots. Absolutely worth spending some time in your sofa for…

← Film Review: “Reflections in a golden eye”
I WANT INDEPENDENCE →