By Chris Papagiannopoulos (A Class)

Dodgeball is a game in which the players in two teams try to throw balls at each other while avoiding being hit themselves. In North America, the game is typically played among children 6–12 in elementary school. However, internationally, the sport has also emerged as a popular middle-school, high-school and college sport and in some countries universities also play the sport. It is also popular in informal settings and is often played on a playground, in the community or in organised recreational leagues.

There are many variations of the game, but generally the main objective of each team is to eliminate all members of the opposing team by hitting them with thrown balls, catching a ball thrown by a member of the opposing team, or forcing them to move outside the court boundaries when a ball is thrown at them. 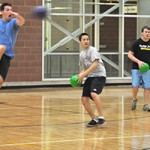 RULES OF THE GAME

At the beginning of a dodgeball game, the balls are lined up on the central dividing line. The players then simultaneously rush towards the center line and try to grab one of the dodgeballs and throw or roll it backwards to their teammates; players cannot pick up a ball and throw it instantly. Once the game has commenced, players throw balls at the members of the opposing team in an attempt to eliminate the players.

When a player has been hit by a dodgeball «on the full» (i.e. without hitting the roof, the floor, any of the walls, or an outside object and rebounding off) and no one catches it before it becomes dead, that player has been eliminated and must move to his team’s designated bench area (players are still out if the ball rebounds off another dodgeball and/or a player and hits them on the full). The same rule applies if any number of people try to catch the ball but drop it. Depending on the rules and variation, «headshots» (balls thrown in dodgeball that hit an opposing player in the head) may either result in the thrower being out, or the person being hit being out, or both.

If a player catches a ball thrown by the opposing team on the full, then the player who threw the ball is eliminated. As long as the ball has been caught in any way and is held for at least two seconds, the thrower is out. If a dodgeball hits an opposing player but gets caught by one of the hit player’s teammates, the thrower is out.

Players can pick up dead balls and throw them back at the other team. Players are allowed to leave the confines of the court to gather balls that have rolled out of bounds, but cannot throw the ball until they are back inside the court. A ball thrown from outside the court cannot eliminate an opponent who is hit. It only succeeds in getting the thrower automatically eliminated. A player who moves completely out of bounds when a ball is thrown at them and does not catch that ball is also eliminated. If a player moves into the opponent’s zone or picks up a ball from inside the opponent’s zone without it fully rolling inside their zone, that player is out. Players can also get eliminated if their throw hits an opponent on the head, displays bad sportsmanship, or cheats. Kicking the balls is prohibited.

Once all players on either team are eliminated, the game is over. 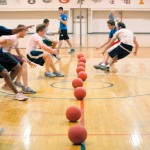 Players running for the balls

← Weird Sports
How much of yourself can you actually be? →